Oakview Lodge Care & Nursing Home resident John Hough enjoyed an afternoon full of celebrations for his 81st birthday and did it in true Elvis Presley style. John has always been a massive fan of Elvis’s music and over the years has collected memorabilia of the King of Rock and Roll. He even met Elvis briefly in 1970 backstage when he was in the US. The team at the care home knew he’d love an Elvis themed party so went above and beyond to ensure he had a memorable day. Everyone at the home enjoyed singing and dancing to Elvis’s greatest hits, especially John who had all the moves, just like Elvis.

John thoroughly enjoyed his birthday party, especially the chocolate flavoured, Elvis themed cake created by the home’s Chef Manager Anthony Whitfield & Kitchen Assistant Karen Millard. John’s children Paul, Jo-Anne and Jamie told the care team at Oakview all about their Dad’s Elvis obsession.  A.  “Dad’s all-time favourite song is ‘Hound dog’ and the whole family would dance to it together. Dad loved dancing, and until very recently he would go jiving every weekend…. When we were younger, both he and Mum would go out and he would also get particularly excited if the evening was Elvis related.’ Said son Paul.

John’s children recall many experiences where Elvis was incorporated in one way or another. ‘One year, the family were looking for a restaurant to book on Christmas day .... Dad found a restaurant (30mins away) that had an Elvis impersonator, needless to say a table was booked within minutes.’

‘As a family we have always been very close and John has been a fantastic dad to all three of us. He had a huge amount of energy which reflected in his work as a film director, his career took him all over the world, but he remained extremely grounded.’  Said Jo-Anne, Jamie & Paul.

He was also very charismatic especially when it came to telling stories, he captivated everyone in a room. He had a passion for cinema and films which led him to becoming well-known as a film director in the 1970’s & 1980’s. He produced several notable films and TV series such as Twins of Evil, The Legend of Hell House, Dirty Mary, Crazy Larry, The Incubus and American Gothic.

For more information about Oakview Lodge Care Home, please contact the home on 01707 375345 or email oakviewlodge@countrycourtcare.com. 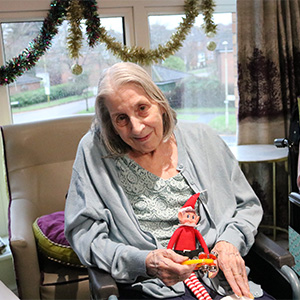