Living in a care home as a couple

Moving to a care home can be daunting for some people, but knowing you can move to a care home as a married couple, retaining your relationship and companionship is a huge relief. Many people are choosing to move to a care home together, even if their care needs are different. Couples have the choice to share a suite designed for two people, or have separate rooms. We have many couples living in Country Court Care & Nursing Homes across the country. We chatted to a few to find out their secrets for a long and happy marriage.

Celebrated their 65th Wedding Anniversary recently at Tallington Lodge. June and John met on the London Underground, around 70 years ago.  June was just 16 and worked in the Home Office, John was in the Navy and was on leave visiting his aunt. There is a slight discrepancy in the series of events, John believes that June approached him, but June says that John came up to her and her friend and asked for her address which she gave him!

It was 2 months later, due to John being away with the Navy, that he turned up on June’s doorstep. Luckily June’s mum approved, and the rest as they say is history. They married in 1957, which was about 5 years after they met due to John’s time away in the Navy. 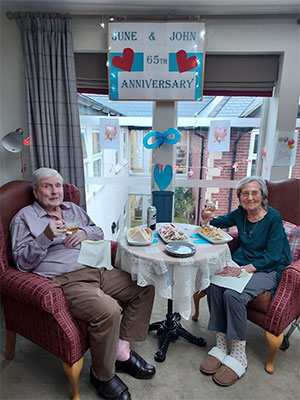 Their fondest memories together are in Cromer, they have both been abroad with work and holidays, but they had a second home in Cromer and the memories of the time there with their son Gary, are their most treasured.

Jean and Derek live together at The Grange Care Home in Saffron Walden. Derek told us all about their time together. Jean and I have been together for 65 years and got married on the 6th of July 1957. We knew each other as children due to family connections.

Jean remembers the day she knew he was the one: “Derek was in in his army uniform, and I was wearing my favourite dungarees!”

When asked what annoyed you the most about each other Derek said, “Everything”, with a cheeky smile and Jean said, “When Derek used to smoke his pipe.” 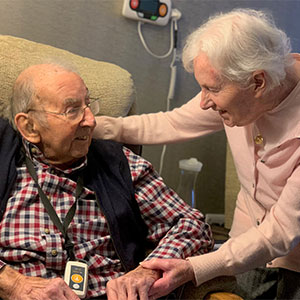 We fortunately have many happy memories of our life together, and we’d say the most important are of when our two children were born. But we also travelled to amazing places and not all were aboard. In 1962 we visited a farm in Cornwall as we were friendly with the son and daughter of the farm owner. We remember our son being 2 years of age and chasing the chickens. We were offered the best homemade pasties each day, which never lasted till lunchtime. The fact that we can still remember how delicious they were, says it all. The secret to our marriage has to be perseverance and a little give and take.

Irene and Tony live at Swanholme Court Care & Nursing Home in Lincoln, they married in 1954 and recently celebrated their 67th Wedding Anniversary. They met at Mrs Franklin’s dancing classes. The classes were held every Monday night at the Co-op Hall on Burton Road in Lincoln. They have two daughters and five grandchildren.

Irene worked selling baby linen at the Co-op department store and Tony was head of works for a time. Later he became a funeral director which he enjoyed very much. Their happiest memories are holidaying in Scarborough or Skegness. They’ve always got on well and can’t think of any annoying habits. The secret of a long marriage is to get on well together. 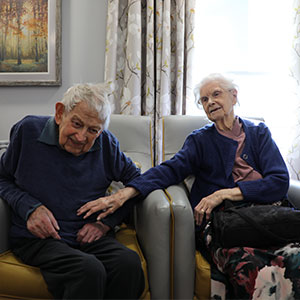 Mary and Les live at Lostock Lodge Care Home and have been together for 60 years. They met when they when to an ice hockey match with friends. Their happiest memory is when they had their first daughter.

What is their secret to a long and happy marriage? Mary and Les think just being together and sharing jobs around the house has been important for them. 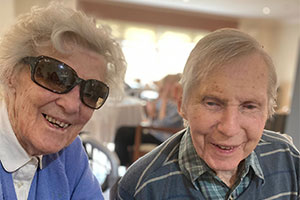 Margaret and Charles have been together for 59 years. They met when Margaret was a secretary and Charles came into her office one day to mend the phone lines. Their happiest memory is the time they spent in Jersey they went 24 times on holiday!

According to Charles their secret to a long marriage is doing whatever the lady wants! Margaret adds that being respectful of each other has been the main thing. When asked what annoys you most about your partner? Margaret says that Charles reading his daily paper before doing anything is his most annoying habit!

Pam and Norman live at Lostock Lodge Care Home, they married in 1954 and have been together for an amazing 67 years. The couple met at a sports club dance and their happiest memory is their wedding day. Their secret of a long marriage is to have lots of family and friends and being together.

When asked what annoys you most about your partner Pam said it was Norman getting annoyed at the slightest thing. Norman says Pam doesn’t always reply straight away which annoys him. 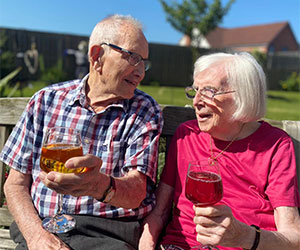 Their happiest memory is their wedding day and visiting the Trossachs in Scotland. What annoys you most about your husband or wife? Sheila insists on helping people who don’t need help, says Brian. Sheila says that Brian gets grumpy playing bridge. 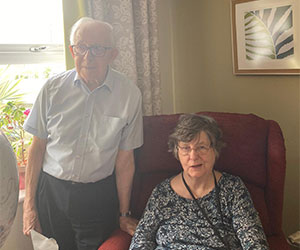 Bernard and Eileen live together at our Tallington lodge Care Home. They are both In their 90’s and have been married for over 50 years. They first met at a dance hall in Cambridge and got married at Eileen’s place of work, on the big day Eileen wore a suit and facet.

After their wedding they moved into their home in Stamford and told us the secret to a happy marriage was to celebrate every anniversary. Even though these days Bernard says that he can’t remember when it is, they still do their best to celebrating with a party and is grateful that Eileen looks after him so well. 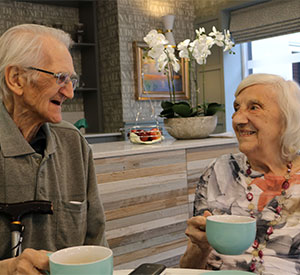 The happiest moment of their marriage was when they found their home and after many years Eileen is also happy that Bernard has given up his habit of smoking.

Whilst they do have their moments, they believe so does everyone and still make sure to look out for each other.

To find out more about life in our care and nursing homes contact the Home Manager at your nearest home. 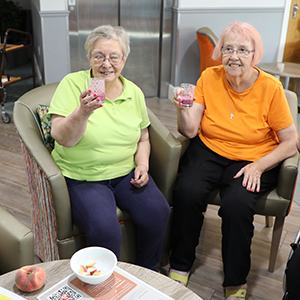 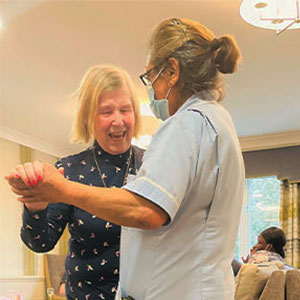 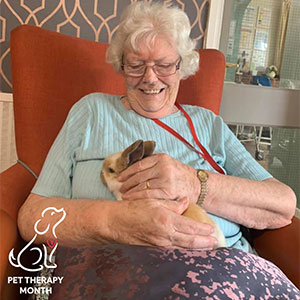 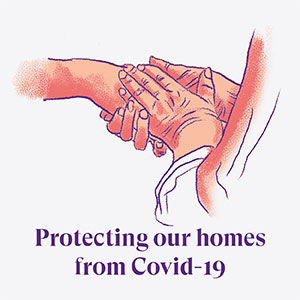